I have been exploring ways to make my videos smoother using my Gopro.
One of the thing that plague fpv flyers is vibration and what we call the “Jello effect” which is really In the correct term it is called Rolling shutter.

What is rolling shutter and what causes it?
NTSC video is normally 29.97 frame per second our uk and over seas friends use PAL which is 25 frames per second.
Each fame that is captured is not capture in one shot.. But captured by scanning very rapidly ether up and down or left to right.
ok now remember were going to talk about one frame of the 29.97 frames in that one second.

here is how rolling frame shutter is cause… In that one frame we just talked about…when you have a fast-moving object… the camera is scanning left to right going from the top to the bottom very quickly.

While is doing that the scene is moving so while is is scanning the top part of the video halfway down the scan the scene has moved a little.

So for the second part of the video it is starting to scan ” moved part of the image and it is trying to glue those 2 parts together.

think about cutting a picture in half.. then slightly misaligned it and taping it together.

Now do that with 29.97 frames you gonna have a wobbly image. The cameras that suffer from this are all SLR’s and Cmos cameras they all work using the scanning system.

CCD cameras do no have rolling shutter issues they take an entire picture in one shot instead of using the scanning method. There is not much in the way of stopping the “Jello effect” But you can calm it down depending on what camera you are using In my case I have the go pro 2 and a go pro 3.
With the go pro 2 setting it to 720p and 60 frames per second it will cut the jello down.

with the gopro 3 you can have higher resolution by setting it at 1080p with 60fps  or at 720p at 120 frames per second will probably give you the best results.

the faster it can capture the less jello you will have.

Vibration can add to this problem too But it is not the total cause of the “jello effect”. The cause is fasting moving objects that the camera can not keep up with. Vibration will cause shaky video, smearing blurriness. they are different way to test how much vibration the model is causing.

there tools like the IPhone ivibrometer that measure vibrations on the x, y and z-axis, you can use lasers and bounds then off you model and see how much the little red light moves.
You can also use strobe lights to stop motion and see what is off this is called stroboscope method by adjusting the speed of the strobe you can slow down the propellers and see what is off and also the same with the shaft.

Today I am going to try some different and something I have not seen anyone try yet to test the smoothness of the image….your eyes.

Yep I said it your are probably thinking i do that all the time when I fly I check my videos to see what is better! you knuckle head!

Well I am going to do it in a more controlled environment and not flying around the yard which would be impossible to duplicate and compare!

I will be doing this indoors and using an eye chart!

with the eye chart I will be able to clearly see( no pun intended) what is really visually acceptable with this method.

The Parts I will be dampening the vibrations will be on:

The spacer’s and frame.
Camera base.
Propellers.

The source of vibrations will always come from the motors.. So in my thinking I want to slow the vibration down at different point so by the time it gets to the camera there is hardly any at all.

There many tutorials on balancing propellers online so I will not go in to details about it now I use the scotch tape method it take about 2 to 3 minutes for each propeller.

I know it is a boring and a pain in the butt to balance each prop every time you fly. But who said you need perfectly balanced props every time you fly?  I suggest keep about 8 pairs balanced and used those for when you are filming if you are just flying for fun who cares if it vibrates a little use the unbalanced ones when you are just fun flying. Here is what I did at point 2 between the motor and the frame arm I used a thin piece of rubber dense foam rubber. I cut this out to fit between the motor mount and the frame arm. Doing this Muffles the sharp vibrations slightly coming from the motors. Also use lock tight on the screws here, the screws here can become loose. Spacer between the frame and arms.I had some heavy thin rubber tubing which I cut a tiny bit longer the spacer itself so it would overlap on both ends. At this point i added a 1/4 inch neoprene rubber pad to the camera base this should knock out any harsh vibration left and only adds about 1 oz to the frame.. point 6. the camera base. 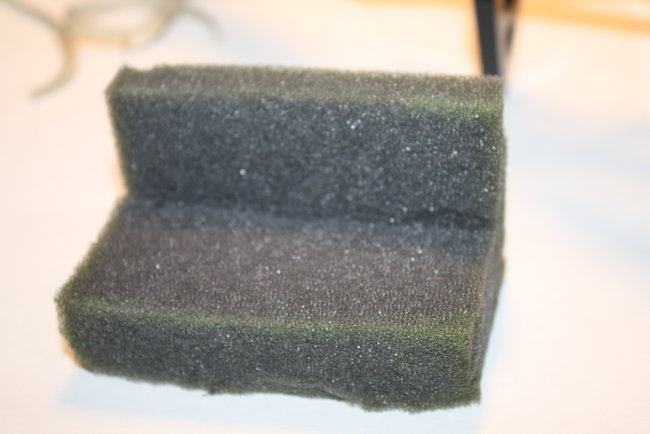 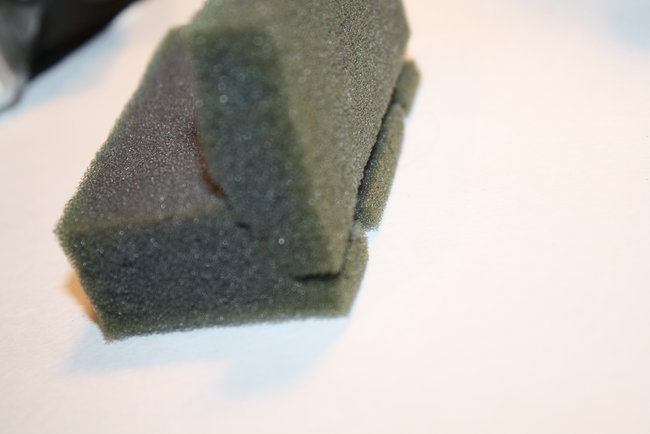 Slot to fit in back of the frame. 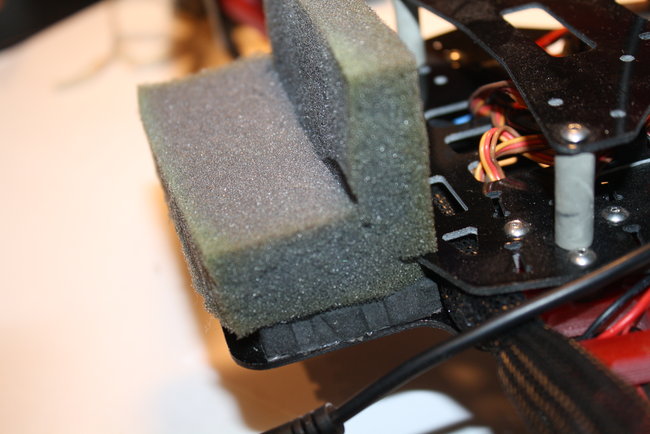 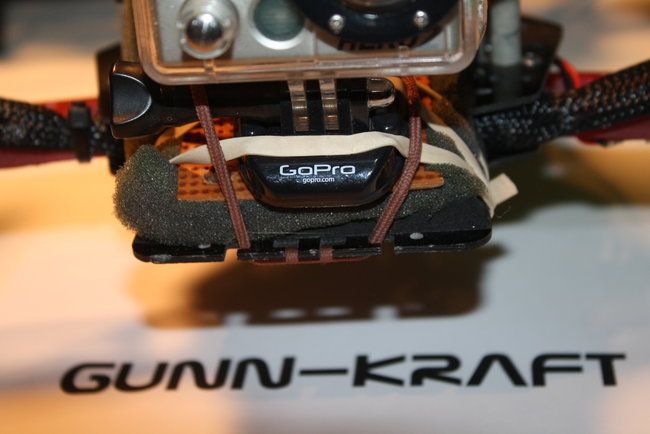 Rubber bands and hair ties. Hair ties are much stronger than rubber band so camera will not go flying off in case of a crash. 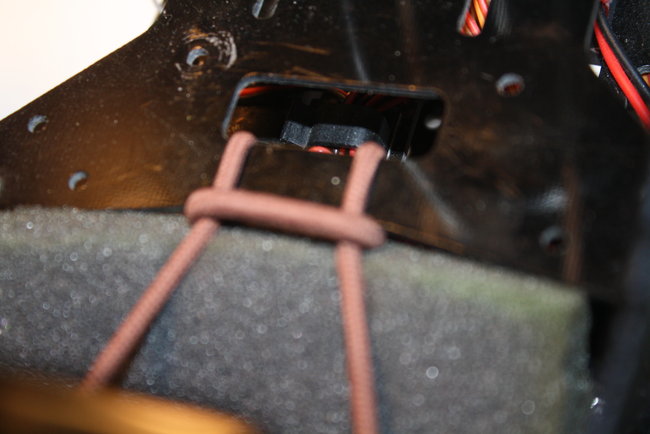 Hair tie looped to back of base.

Just to really get an almost vibration free on top of the neoprene I made a camera mount. This was made out of sound proofing foam which is very dense which is a great insulation for sound and vibration not like a sponge which can be too bouncy. I had already had placed the spacer and the mounts and the neoprene before writing this article I do have one video but it was not in a control environment.

I used 3 types of eye charts and some text for the test.

If i can read red text and see the lines and symbols clearly without shaking i am happy with results then.

Video was shot using a gopro 2 using medium wide and 720p I did not slow down the video or use any smoothing additives.

i was getting a lot of prop wash and ground effect so it was hard to keep the quad steady.

You will see how my quad used to shat and vibrate just look at the letters on the big sign on the before.

And you can see the difference of the after video. I did this video after i did all the dampening so i did have a “before video” using the eye chart.

Here is the video

Hope this helps you guys if I missed something please add it the comments and I will updated this post.