When Jesse build his first quad he could not fly it at that time and I was his pilot not that I had ever flown a quad before.  I had some experience  with radio control heli’s .. mostly crashing.
But it was time to get him flying as I had promised him that he could fly his quad that he had built. the first quad he built used a Hoverthings.com ht-fpv frame which was great but a little delicate for beginners.

I got to know Tom at Hoverthings and he really liked that I was teaching an 8-year-old how to build quads. one day talking to him he told me about a new quad frame he was developing that was going to be practically indestructible! I laugh and said have you seen me fly?  But he swore it would not break unless it was extreme circumstances. So I had to have one!  a week later I got one of the first one’s. 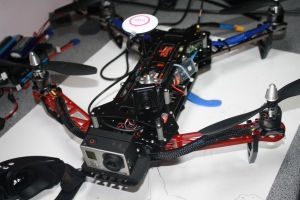 I mostly fly over concrete no soft grass or dirt for me! since I got it I have crashed it many times sideways in walls, drops from 20 feet on to concrete and what has broken? only props, I bent 2 screws and snap a total of 3 landing gears in about 20 crashes… the frame? just some scuff marks! When I crash now people go OHHHH! I laugh now… I know the most I broke is a prop or 2 and I am flying again in about 2-3 minutes or less.

I live in NY the concrete jungle there are no flying fields near me the closest one you need a car to get to it. Being a true new yorker I don’t have one. and have never met a fellow RC pilot in person. To learn fly quads I had taught myself the hard way.. lots of crashing! I started to look on the internet for some a simple ways to learn how to fly there was none that were helpful.. I thought about it for a couple of weeks and came up with my own way of teaching!

So this would be the perfect quad for Jesse to fly!  And this is my flying course for Jesse  Welcome to Gunn-Kraft flight school!

Click here to learn how to fly a quadcopter line of Sight or FPV.