My version of Turkey Wellington

Thanksgiving is over so does that mean you can eat turkey till next year? I like turkey so much that I had bought 2 last week. My first turkey of 25 lbs. went in 2 days.

This week I was thinking how could we make it different I was going to de-bone and put it back together again. But I decided it would be too much of the same thing so I decided to cut it up in parts I removed the breast legs wings and frozen the bones till I am ready to make stock.

So I told Jesse if he wanted to use the puff pastry we have in the frig the answer was yes!

I am going to run this recipe simply by saying I use whatever I have in the house I can use.

In this case I did not have string so I improvised so I made due with out.

What you will need

Rub butter sage ant thyme and butter on both sides sprinkle salt and pepper both sides.

If I had string I would have rapped the turkey in a log shape.

Place on a tin foil on a tray (so you have less washing up to do) and grease it with olive oil.

Put the breast skin side up. Pre heat oven to 450. 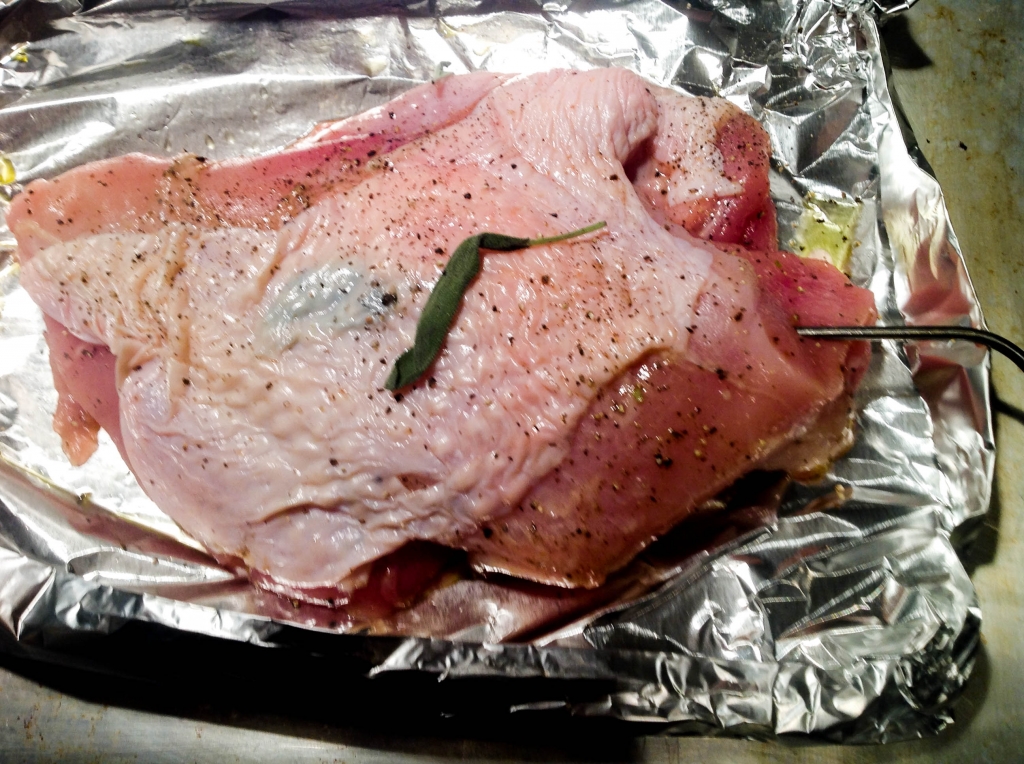 Insert a thermometer if you have one in it and put in the oven.

Cook it for 20-30 mins till the skin gets a little brown then turn down the oven to 35o degrees.

Keep an eye on the internal turkey temperature it will be done ready 145 it will still be a little raw in the middle I will get to that later.

While that is cooking…

Prepare you stuffing you like I saute the onions and celery first in butter with salt and pepper the salt hep break down the the veggies. Add it to you stuffing mix you can even use stove top stuffing.

You want your stuffing to be a little mushy. Wait didn’t you say last time you like you stuffing crispy?

Yes I did but in this case it is different it will be used in a thin layer and you still will get crunch.

OK take out the turkey breast at around 140-145 internal temperature. And let it rest for about 10-15 mins on a wire rack you can pour a little of those cooked juices in to the stuffing.

Also at the same time get the dice prosciutto and also dice up some onions and get them crispy brown. 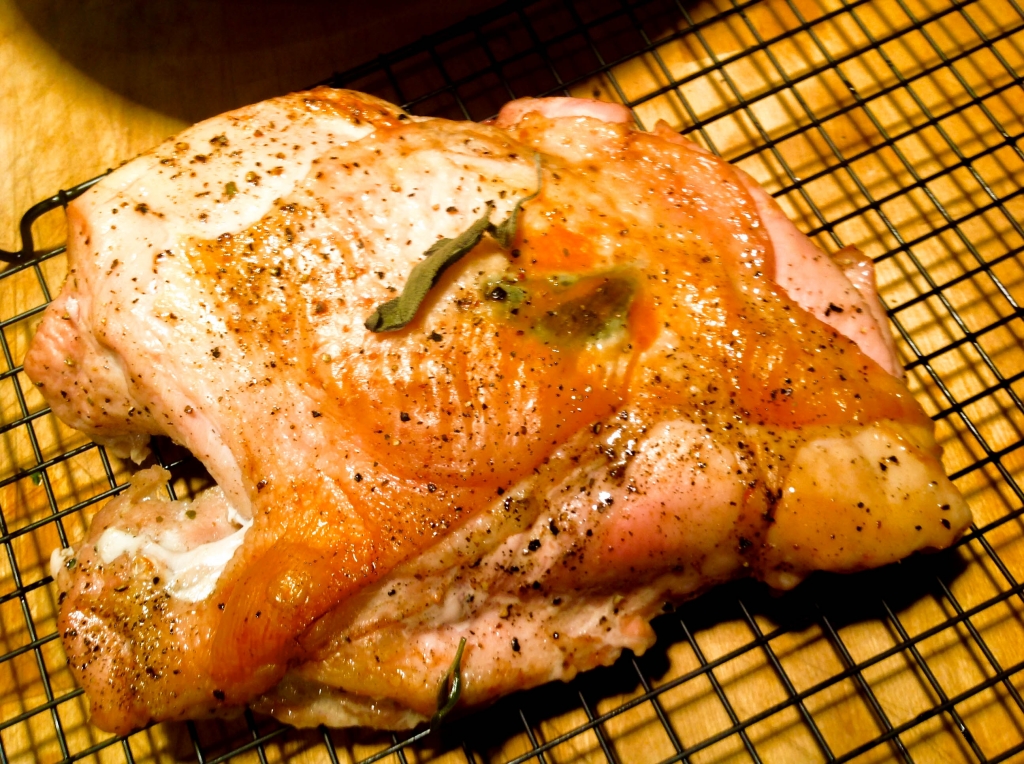 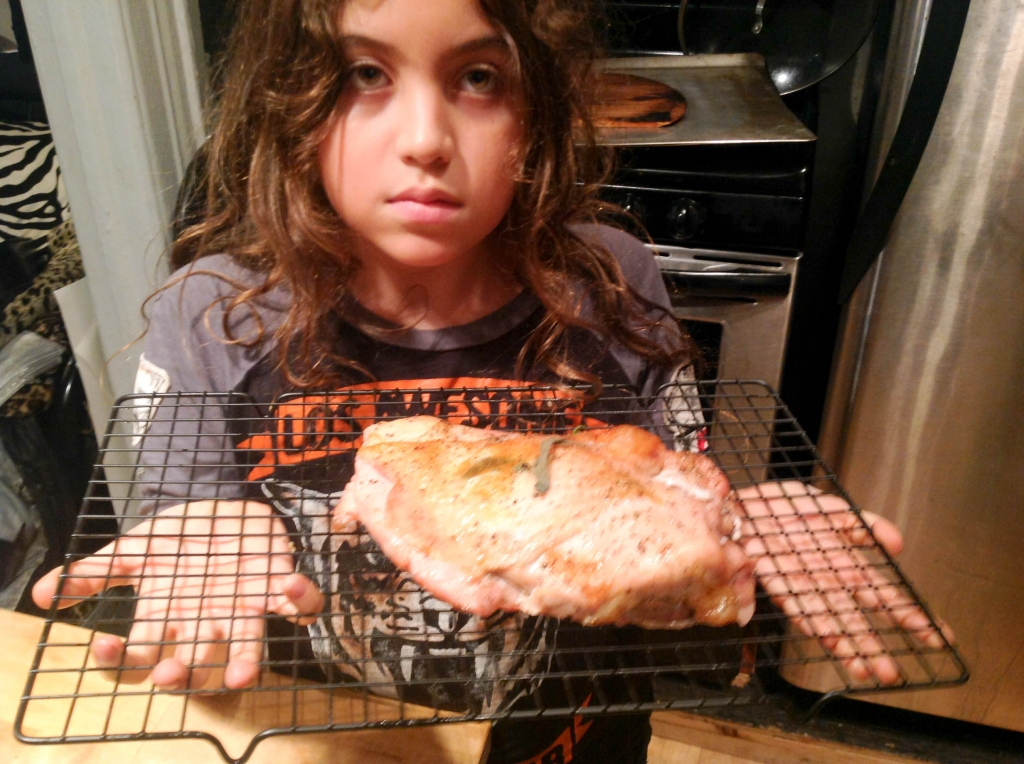 OK stuffing is ready and the turkey now to the puff pastry and potatoes.

Cut potatoes in quarters place in oven pan like a cake tin. Use a heavy hand of olive oil and pour over potatoes you want the well coated and have oil on the bottom of the pan. Crush up some chucks of garlic toss the big chuck in the pan and add kosher over the potatoes and cracked black pepper make sure all the potatoes are coated. Toss it in the top oven rack.

Make sure you puff pastry is thaw out correctly my taking it out of the freezer the day before and in in the refrigerator.

Lightly dust your work surface with flour open the box of puff pastry as you unroll it and dust it with flour.

You want to work quickly at this point because the dough get soft very fast.

It will be a bet tacky so the flour will make it easier to work with.

Roll out the pastry lightly to it is a couple of inches bigger.

Bush with the mustard but not all the way to the edges use lightly or as much s you like. 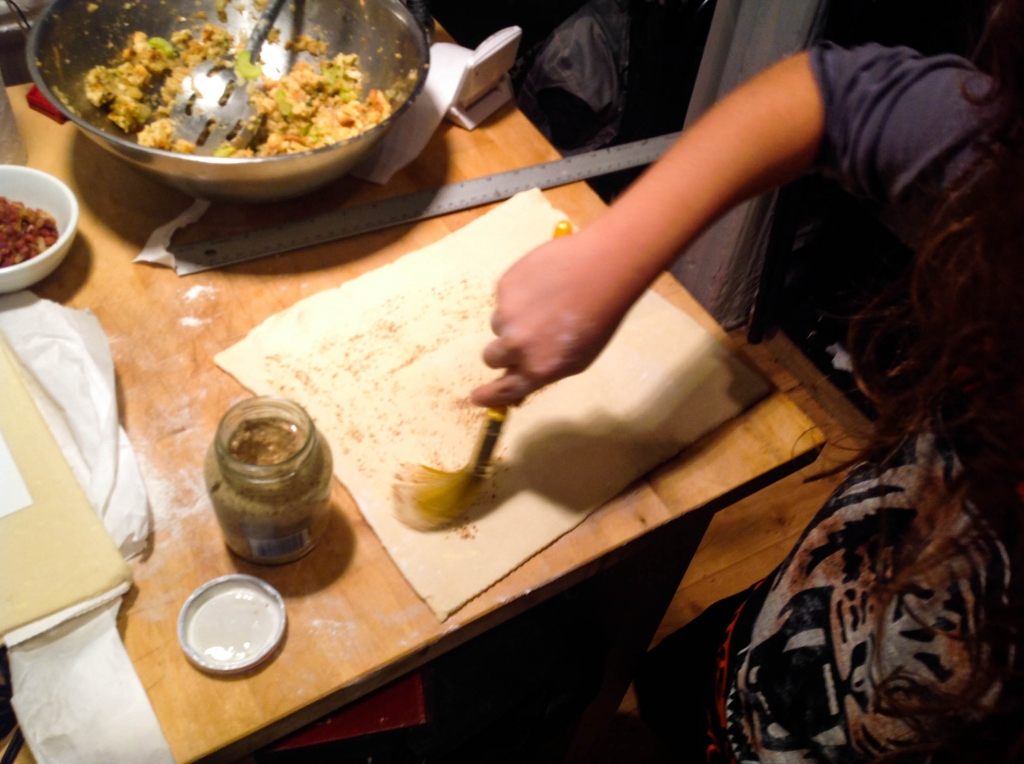 Next add the Swiss cheese. 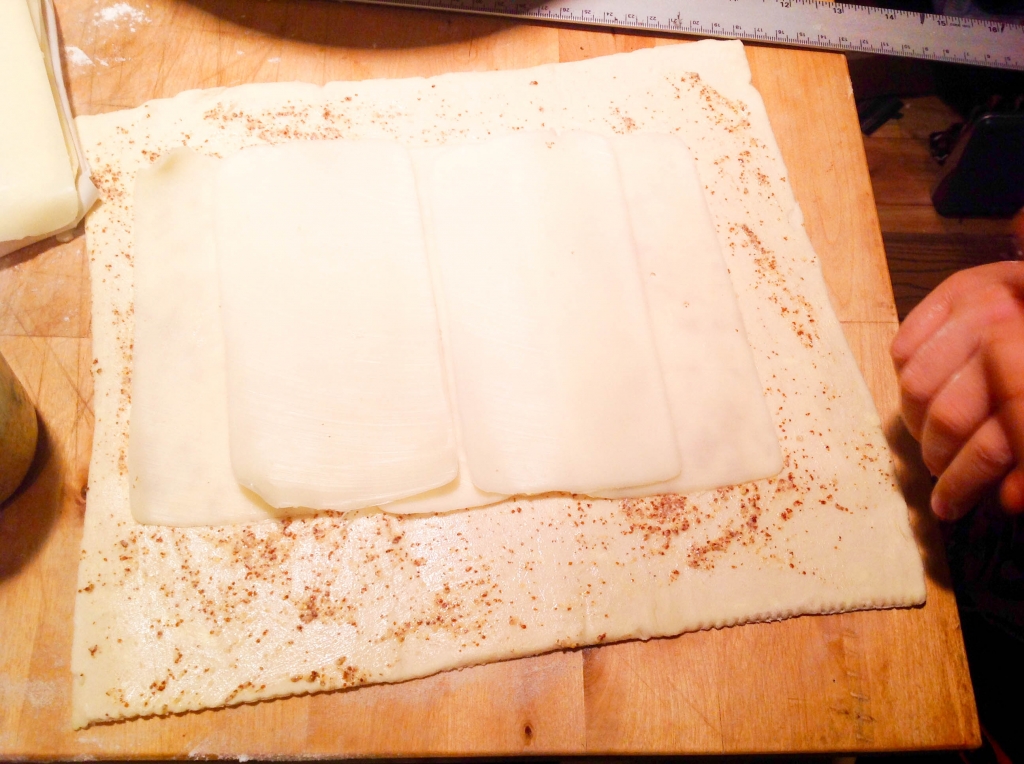 Now layer the prosciutto and onions 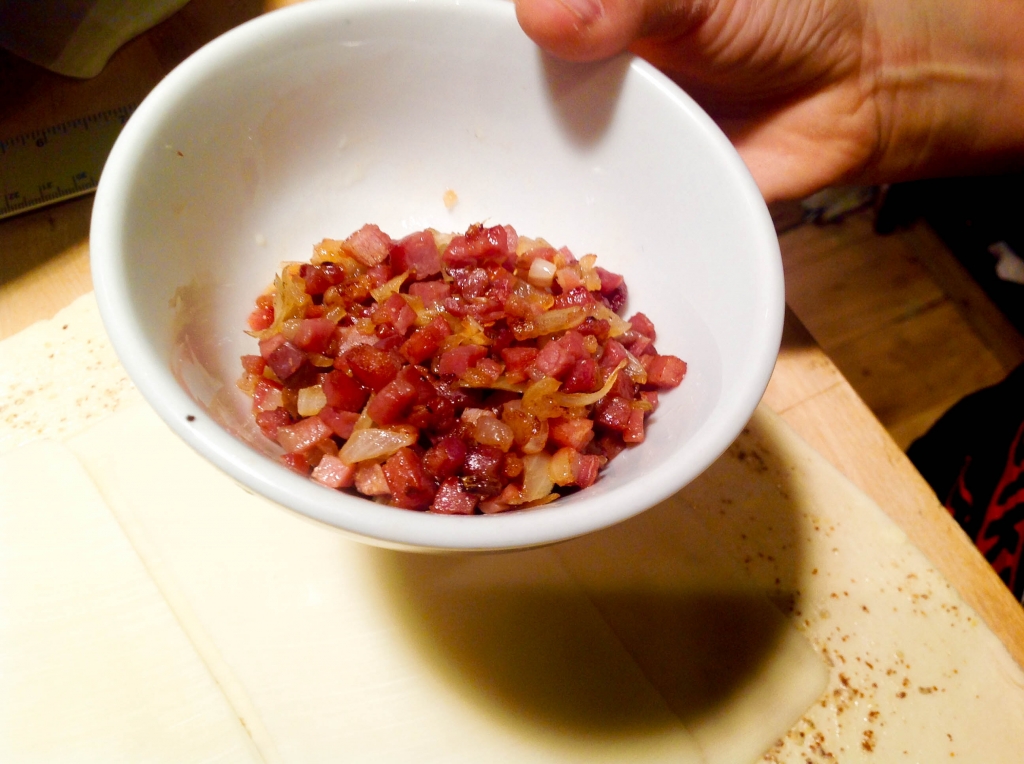 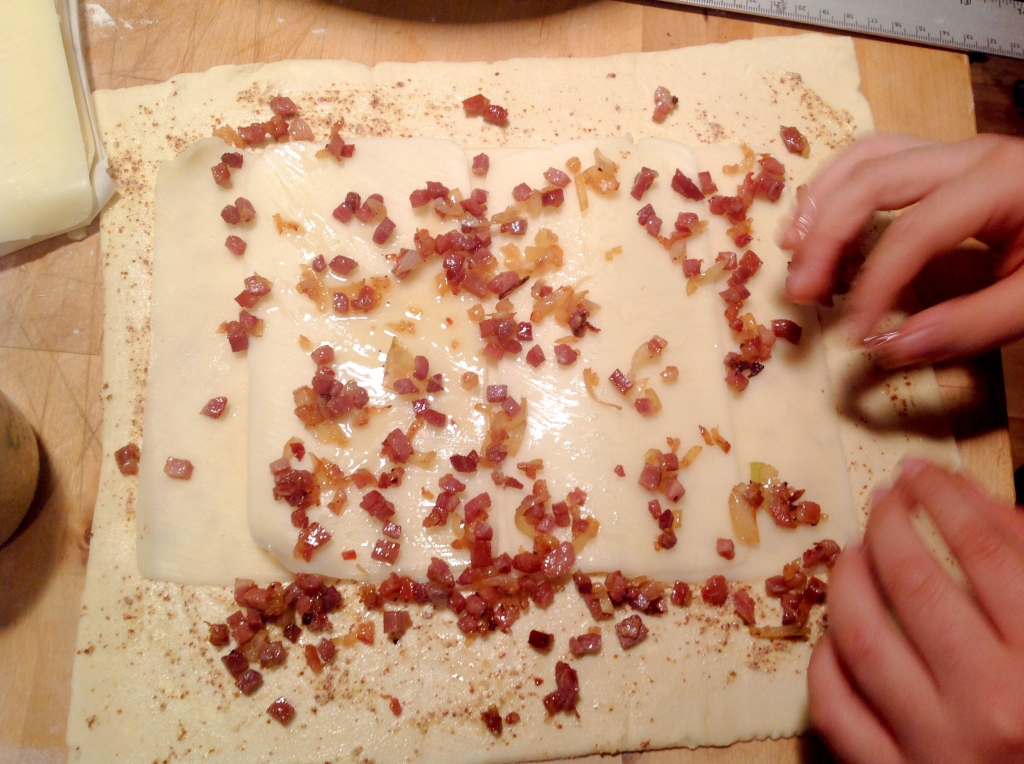 Add the stuffing in a thin layer 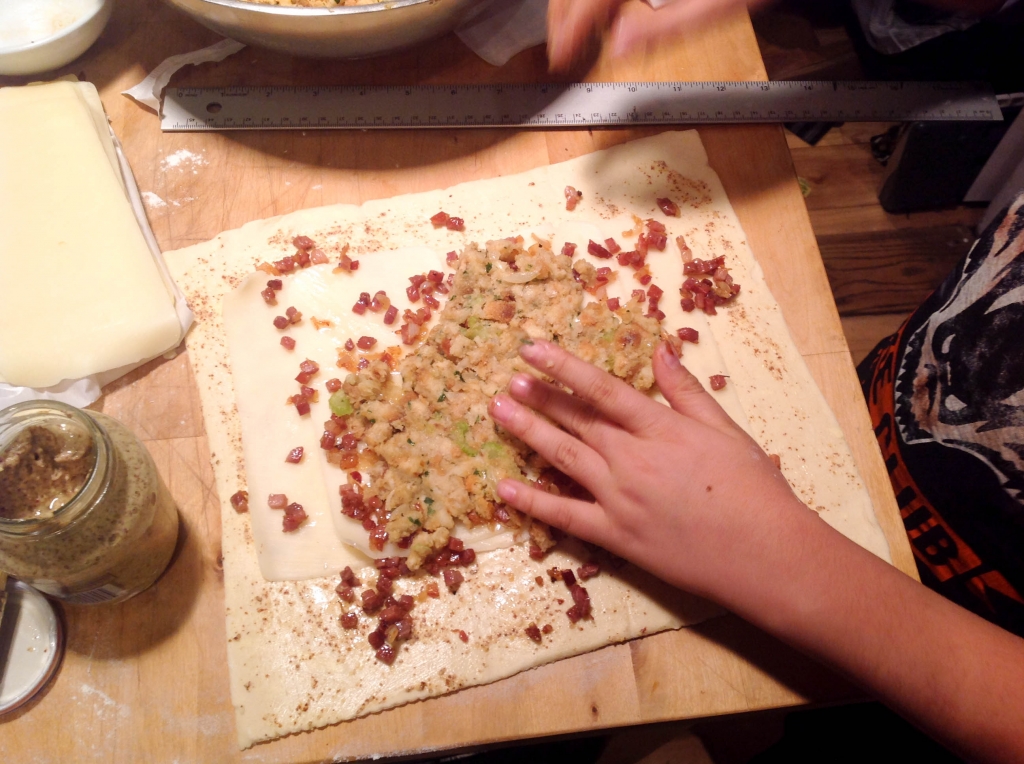 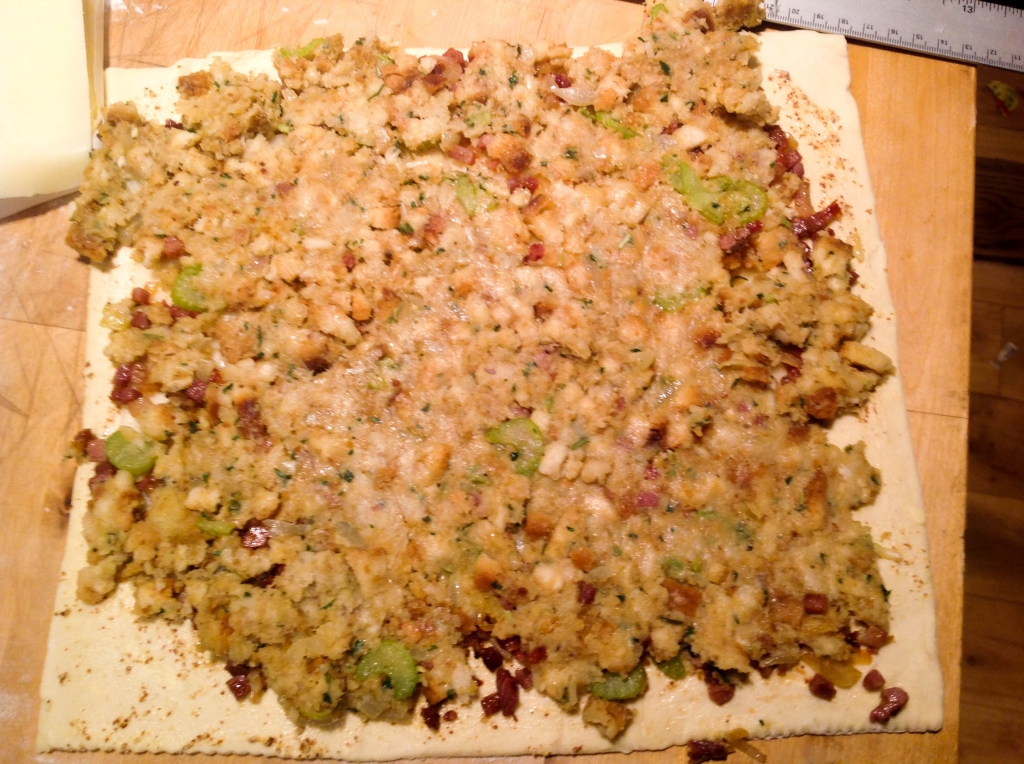 You can roll the stuffing with a rolling pin if you cover it with parchment paper.

Add the turkey breast skin side down. 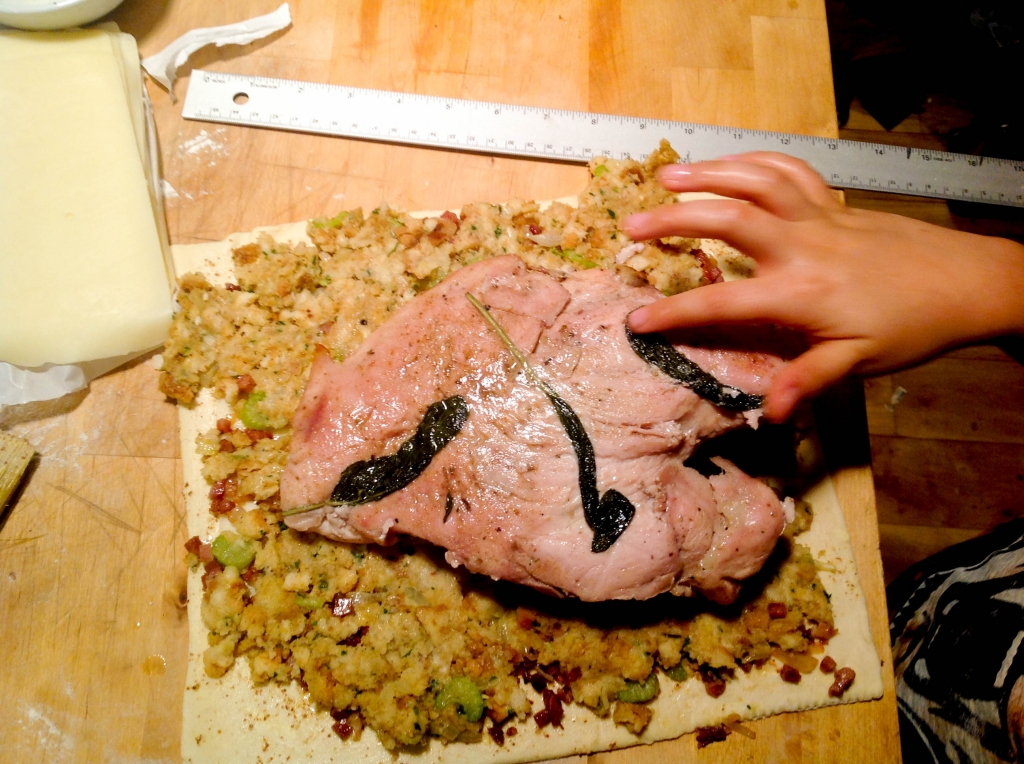 Start to gently bring the edges up to cover the turkey be very carefully the dough is getting soft.

Add another layer of pasty and trim away excess. Make sure you pinch tight any seems or holes or gaps. 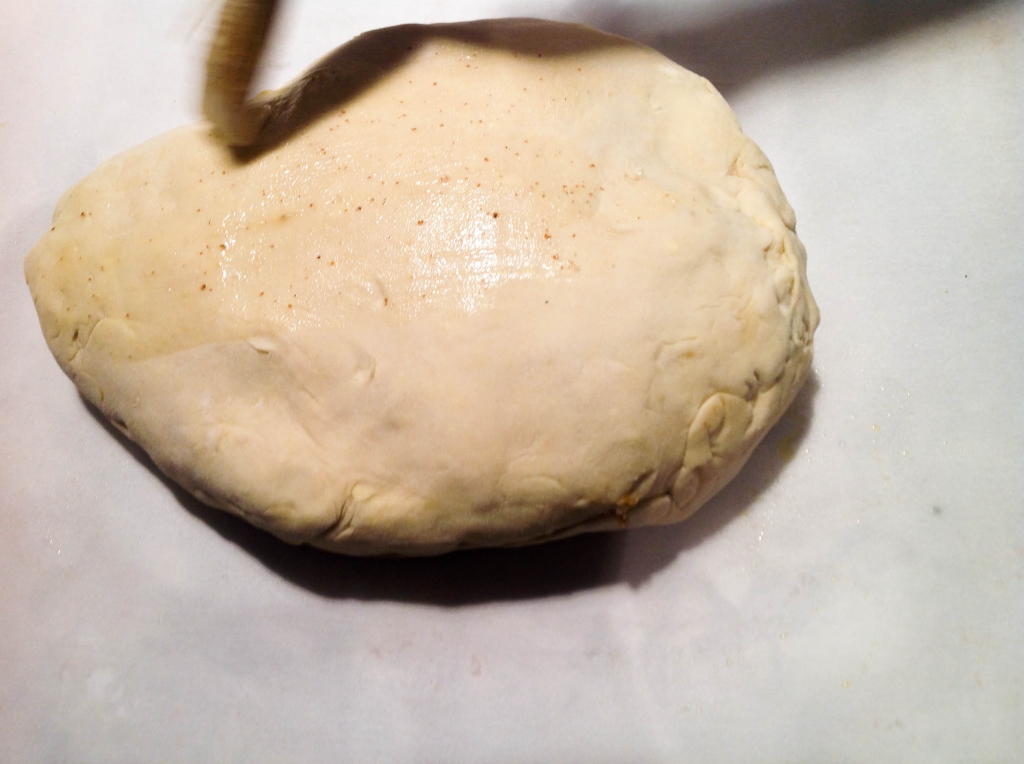 Gently flip it over on to lightly coated tray with parchment paper and brush with butter and egg yoke. 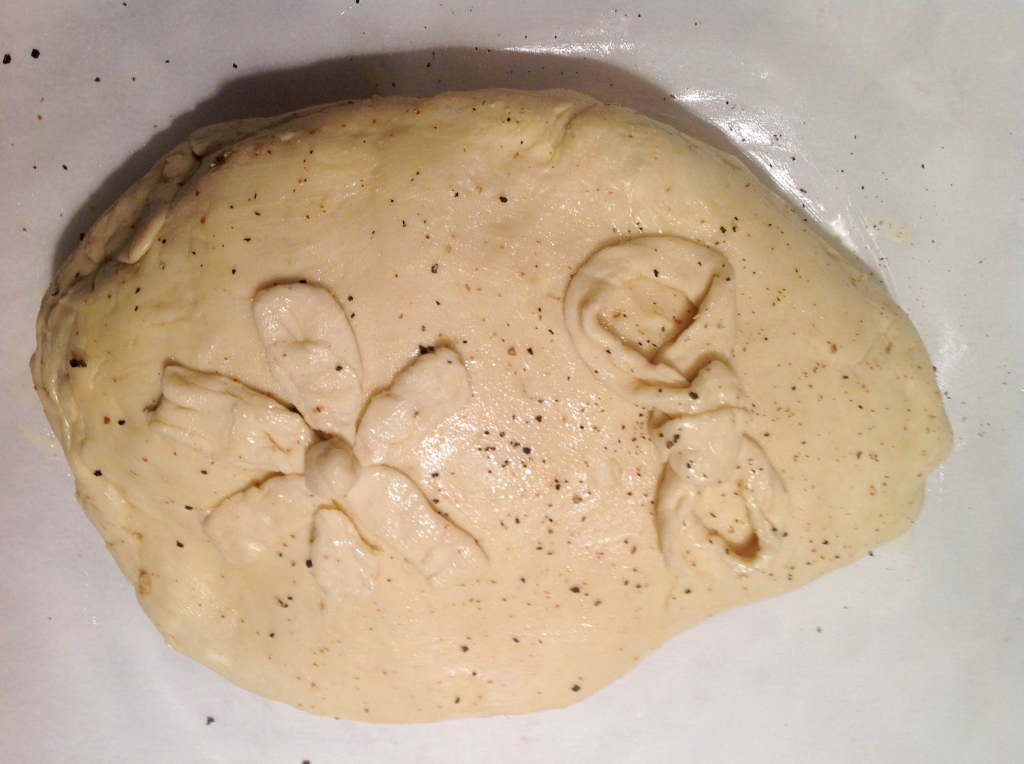 Salt and pepper on top. Make a couple of slits to allow the steam to release or else you gonna have a balloon.

Put in 400 degree over for about 40 mins. At that point if not too brown yet you can raise the oven temperature to higher it can take about 15 or so minutes and keep an eye on it till cook till golden brown. Don’t go on the phone or Facebook at this time.

The wellington should look something like this.. and the turkey inside should have a temperature of 165-170 now full cooked. 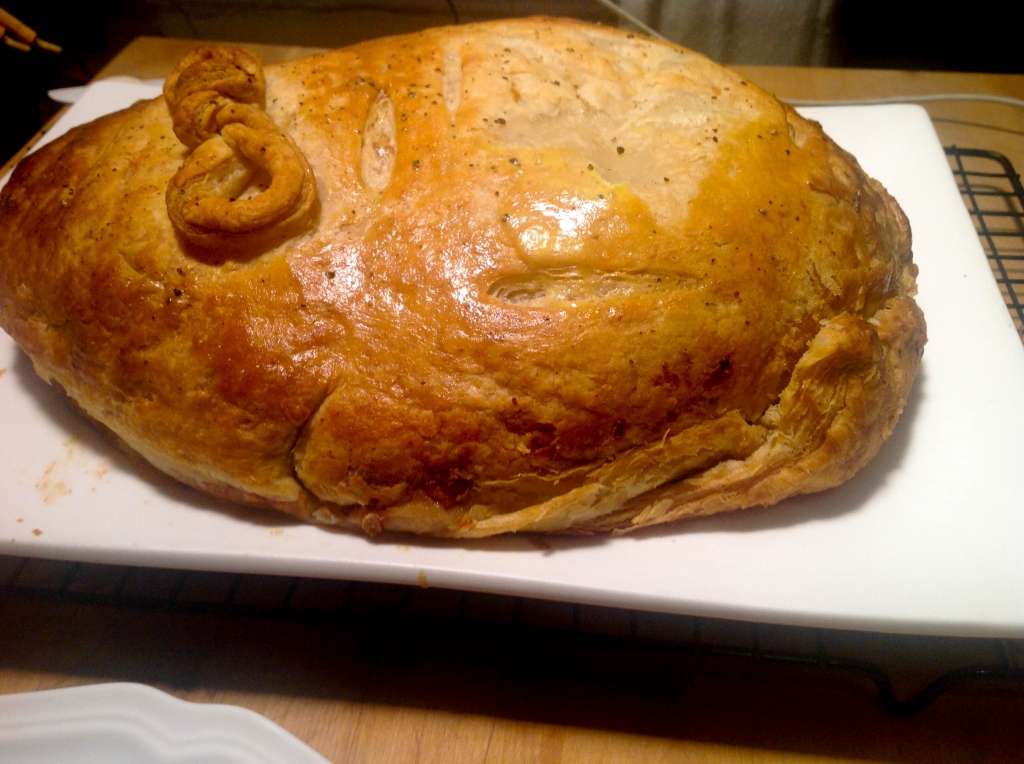 Check to potatoes see if they are also golden brown

Let it rest for about 10 mins then slice. 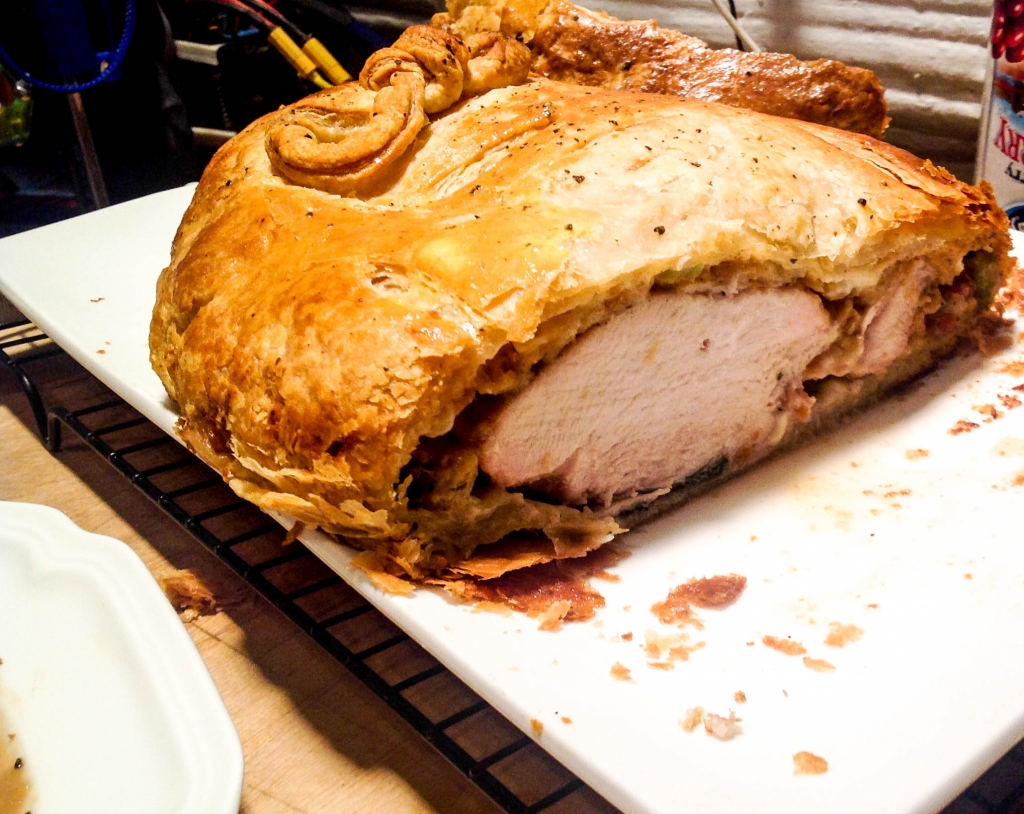 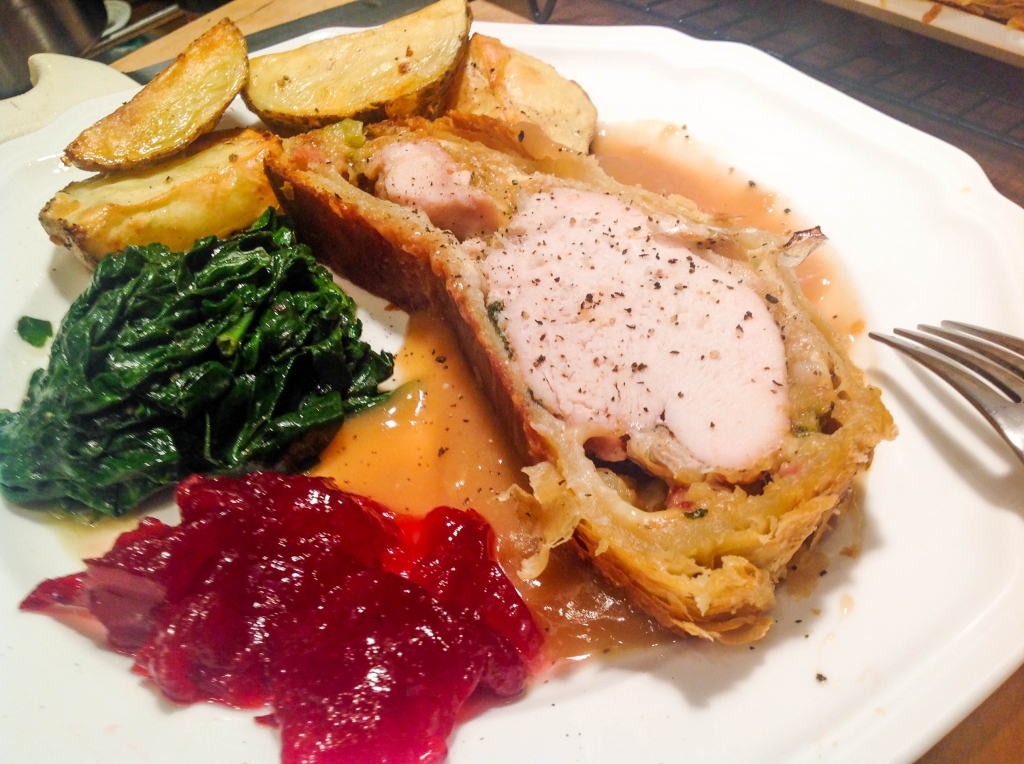 It should be flaky crispy buttery and delish!